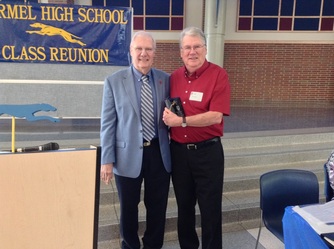 Dan Logan, on the left, was born in Carmel as well as 3 generations before him. His grandfather and mother, a hall of fame winner herself, were very involved in Carmel activities.
He attended kindergarten in the basement of the Carnegie Library, which just celebrated it’s hundredth birthday.
He had a quite traumatic first grade beginning, as he mistakenly got on the wrong bus and went to Clay Center instead of Carmel.
He was in the band in high school, playing in the first Allegro and continues to play in an orchestra.
His high school days were busy as he also was a delegate to Boys State, active in Boy Scouts, and a National Merit Scholarship Finalist..
He served as class president during the eighth grade and his junior and senior high years. He was also valedictorian of his class.
He attended Purdue and received degrees in engineering and business. After graduation he went to work for DuPont, and worked in 12 locations in the US, never forgetting his hometown.

His interests led him to become a pilot, He and his wife have also traveled extensively throughout the country in their RV. He is now an author, having published two novels, with a third in the making. Upon returning to the Carmel community after retiring, he was active in the Carmel Clay Historical Society.

A proud member of the class of 1959, I am honored to give this year’s award to Dan Logan